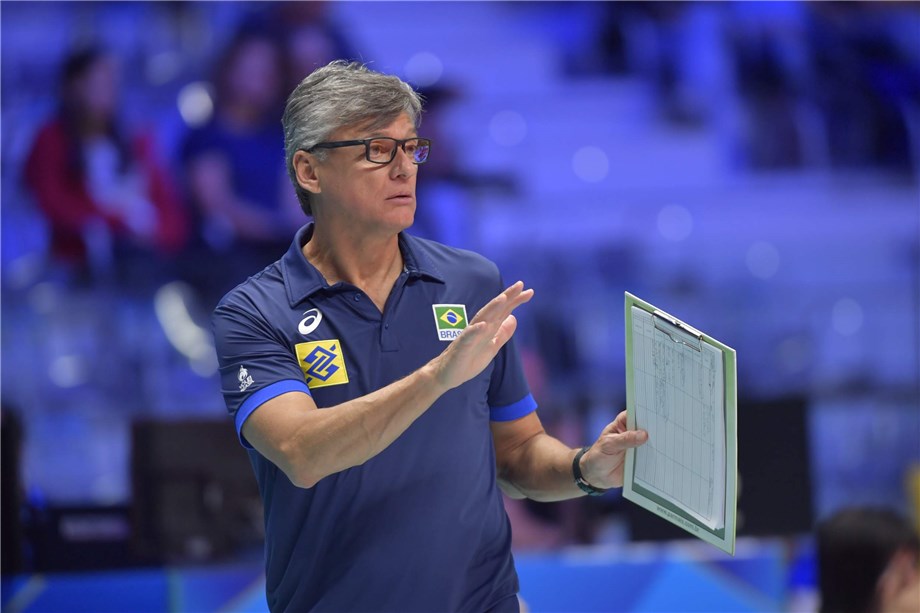 Rio de Janeiro, Brazil, April 16, 2020 – After winning the 2019 edition of the FIVB Volleyball Men’s World Cup, Brazil entered 2020 with a plan in place to succeed at the Tokyo 2020 Olympics. With the Games postponed to 2021 due to the coronavirus pandemic, however, head coach Renan Dal Zotto and his staff are currently working on adjusting that plan to the current scenario. But the goal is still the same.
After taking the position in 2017 following 16 successful years under former head coach Bernardo Rezende, Renan and his staff developed a four-year plan to approach the Tokyo Olympics, which was about to enter its final stage this season.
With the Olympics now starting in 15 months and the 2020 FIVB Volleyball Nations League postponed, the Brazilians are gathering as much information as they can in order to adjust their preparations.
“We really value our planning and now we have to adjust it without a lot of certainty, which is obviously not great, but that’s true for the entire world right now,” the coach explained. “We’re working on plans B and C already so we’re ready for whichever scenario we face going forward. When the situation is under control and our schedule is more defined we’ll be able to determine if we’ll have enough competitions during the upcoming months or if we need to add some exhibition matches to it.”
The expanded timeline could also impact the Brazilian roster heading into the Japanese capital next summer. After the World Cup triumph, Renan had no more than a pair of questions to answer concerning the 12 players who would represent the country in the Games. The situation has now changed.
With an entire club season ahead and 15 months until the Games, the coach is open-minded in regards to testing more players before the final list is decided.
“It’s all open again,” he reflected. “It’s a long period of time and anything can happen. I’ve seen several times situations in which younger players earned their place in the months leading to important tournaments. I can only take 12 players to Tokyo and I want to make sure that the decision is fair and that I have players that can help us when needed.”
The Tokyo Games will be Renan’s first as a head coach, but the 59-year-old veteran has plenty of Olympic experience under his belt. As a player, Renan competed in three editions of the Games, winning the silver medal in Los Angeles in 1984.
He has also been at the Olympics as a TV analyst and was the national team’s director for the Brazilian Federation during the Rio 2016 Games, his last position before taking the coaching job.
Heading to his sixth edition of the Games, the veteran admits he doesn’t have a recipe for the event, but he has a good idea of what will be important for Brazil in its quest to win back-to-back gold medals.
“I’m sure no one has this formula and that’s what makes the Olympics a magic event,” Renan reacted. “One thing that I believe is essential is to develop a plan to minimise any chances of making mistakes, especially if your goal is to compete for medals. We’ve been working on it for a few years and our team, which is formed of experienced professionals, is taking every detail in consideration to determine which the best route for us to take is.”
More volleyball from Brazil:
Bruno pens farewell message to Lube Civitanova
Weber departs from Club Bolivar to coach Taubate
Brait: "De Gennaro is the best libero in the world"
Brazil's 2019-2020 women's Superliga ended
Rahimova in the spotlight in Brazilian Superliga
Quick links:
FIVB Volleyball Nations League
Olympic Games Tokyo 2020FacebookTwitterInstagramYoutube
{{item.Title}}
See All News
This website uses cookies to ensure you get the best experience on our website. For more information please read our Cookies Policy.
Ok