Sanders in an uphill battle to be ready for Tokyo 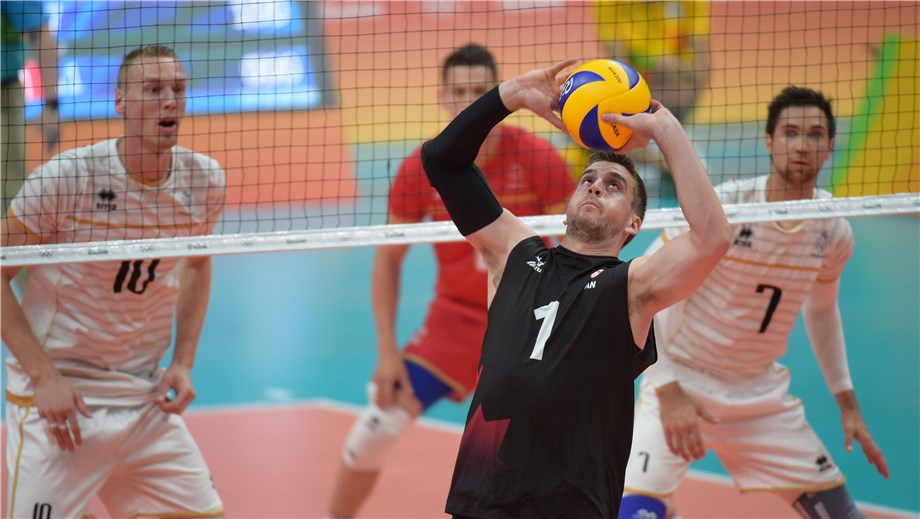 Calgary, Canada, May 5, 2020 – Tyler Sanders has helped Canada to qualify for the Olympics in Tokyo, but the journey towards his second appearance at the Games includes dealing with back injuries suffered during his childhood and in 2018. The 28-year-old setter is hoping for good news in the near future.
Sanders has been a consistent contributor with the country’s national team, helping the Canadians to win bronze medals at the 2017 FIVB Volleyball World League and the 2015 Pan-American Games, to finish fifth at the Rio 2016 Olympics and to top the 2015 NORCECA Championships. 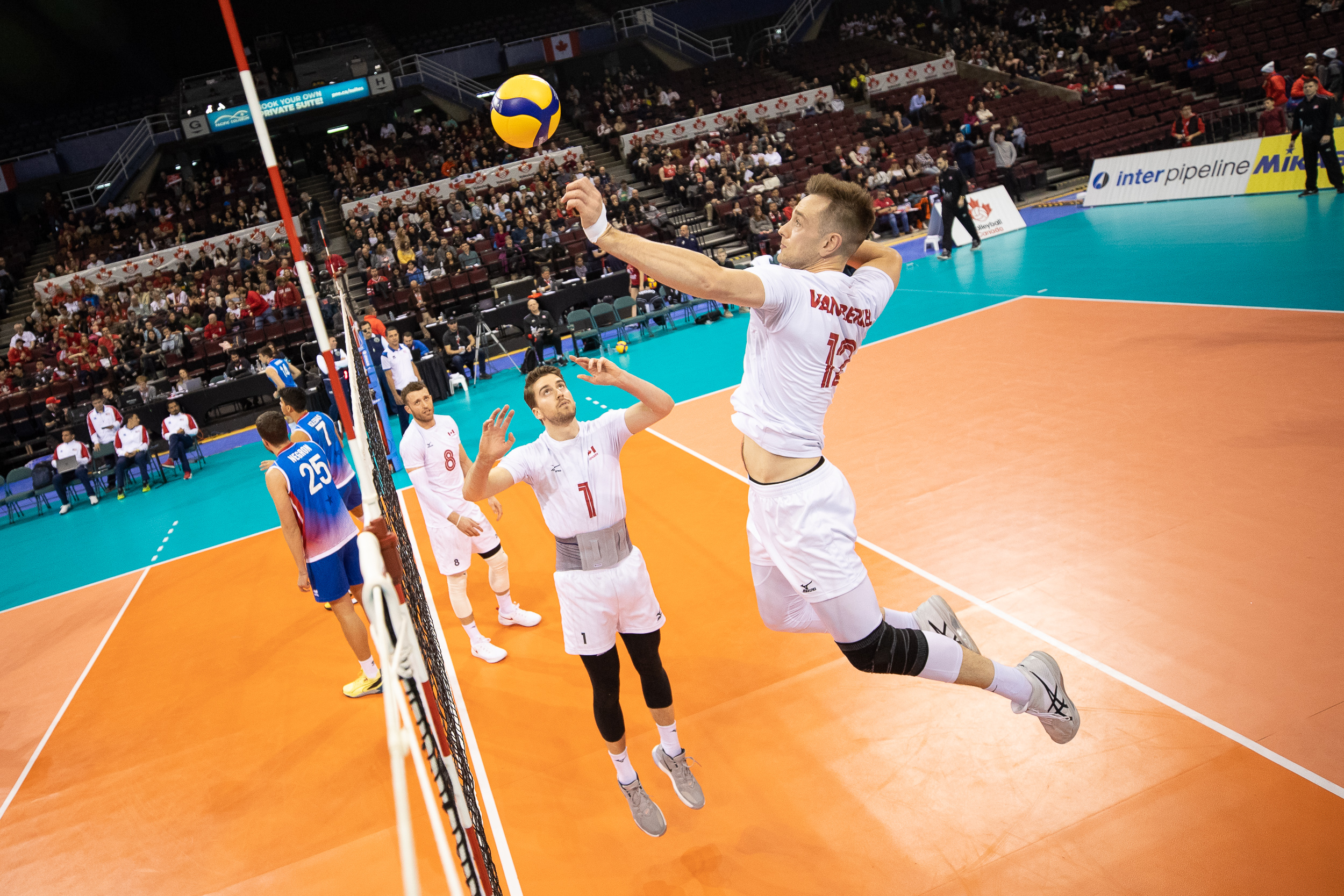 Sanders wore a medical belt to protect his back during the NORCECA Olympic qualifier in January
His career has also taken off at the club level as the setter has won national titles in Switzerland and Poland, two of the four countries he has played in, but it all started to change during the 2018 FIVB Volleyball World Championships, when his back only allowed him to appear in a few sets in the team’s campaign.

The delicate situation of his body doesn’t stop Sanders from dreaming about the Games, but he approaches the future with caution.
“When I was younger I used to make plans and schedule things and have dreams and pursue those dreams,” he said in a live Instagram session hosted by the Canadian Volleyball Federation. “With my injury, it’s been different, it’s more of a day-to-day kind of thing. I definitely have the ambition of going to Tokyo and winning a medal, but beyond that I’m not really sure. I hope my career isn’t over and I’ll keep trying things, but the reality of my injury is that there’s no remedy for it, it’s a very long-term thing. I have to keep my quality of life in the back of my mind when I make a decision and playing at the highest level puts a lot of burden on my body as I have a compromised spine.”
His physical condition meant Sanders cut the 2019-2020 club season short after just three months, ending his contract with Poland’s MKS Bedzin.
Because of the injury, Sanders wasn’t able to play with the national team for the Tokyo Volleyball Qualification tournament in China, when Canada finished second. But he was called up by coach Glenn Hoag for the NORCECA Olympic qualifier, in January 2020, in Vancouver, the last opportunity for the North Americans to secure their spot at the Games.
His condition was still far from ideal and the setter sat out the first two matches, saving his energy for the third and decisive game, which ended up being a five-set battle against Cuba. Sanders had to take several measures to protect his body, including avoiding jumping when possible and stand-serving for the first time in several years.
“That match was really getting into my mind because I hadn’t been able to play until then, I hadn’t played in China and I was feeling bad I wasn’t helping the team,” he recalled. “We had the luck of starting that third set on fire and afterwards, it just felt we were playing really well. I was obviously excited we were on the way to take the match to five sets, but also worried if my body would hold it, so there were a lot of different emotions and thoughts going on at the same time.”
His rehab routine in Calgary includes physio, acupuncture, yoga and Pilates sessions, which help to alleviate the inflammation in his back. The postponement of the Games to the summer of 2021 has given Sanders more time to get his body right, but at the same time it has also expanded the window in which he’ll be susceptible to having to deal with problems.
“I see it as a two-sided thing,” he explained. “I need to be very meticulous with my back and the Games being delayed a year gives me more time to do that without rushing anything. I can really focus on making sure that my body is released in a certain way. But with a long-term major injury there’s always the risk of a setback. I’m more relaxed by the fact that there’s an extra year and that I can take good care of my body, but who knows what’s going to happen during this preparation phase, which is now longer?”
More volleyball from Canada:
Perrin: We will head into Tokyo prepared
Canadian UCLA star Daenam Gyimah is also hip-hop artist Kofi
Quick links:
FIVB Volleyball Nations League
Olympic Games Tokyo 2020FacebookTwitterInstagramYoutube
{{item.Title}}
See All News
This website uses cookies to ensure you get the best experience on our website. For more information please read our Cookies Policy.
Ok