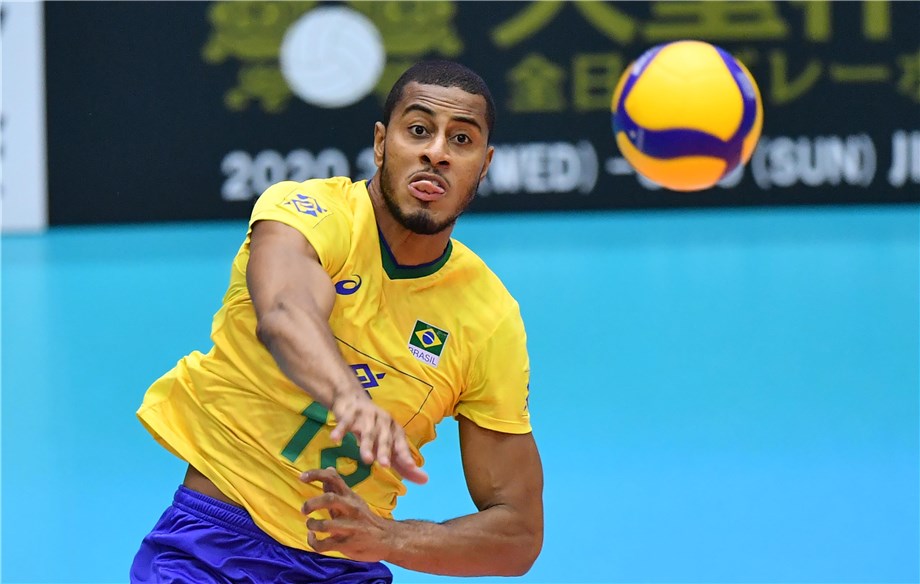 Contagem, Brazil, March 8, 2020 – Reigning champions EMS Taubaté Funvic took the lead of Brazil’s Men’s Superliga just one match before the start of the playoffs as the team secured an impressive 3-0 (25-18, 26-24, 25-22) road win against reigning South American champions Sada Cruzeiro Vôlei in Contagem on Saturday.
Star outside hitter Ricardo Lucarelli was a key factor in Taubaté’s win as the Rio 2016 Olympic champion led all scorers with 15 points and was considered the best player of the match against the 2019 FIVB Volleyball Men’s Club World Championship silver medallists.
“I’m very happy that we won and took the lead, but we still have another match to confirm we’ll be the top-seeded team heading into the playoffs, so the job’s not done yet,” Lucarelli reacted. “But it was a great overall performance and that makes me very happy. We were focused on receiving, served smartly and blocked and sided out well and we needed all of it to defeat such a great team as Sada Cruzeiro."
The 28-year-old Lucarelli is a regular with Brazil’s national team since 2011 and has helped the team win the FIVB World Grand Champions Cup in both 2013 and 2017, when he was elected the Most Oustanding Player, and the 2019 FIVB World Cup.
He’s also one of the best players in the 2019-2020 Superliga as he leads the entire league in aces (34), ranks second in aces per set (0.49) and fourth in spiking efficiency (59%).
Taubaté, which is commanded by Brazil’s national team head coach Renan dal Zotto, also benefited from a solid night by veteran opposite Leandro Vissotto. The 36-year-old London 2012 Olympic silver medallist added 15 points for his side.
Taubaté now have 54 points (17 wins, four losses) and will try to confirm the top spot heading into the 2019-2020 Superliga playoffs next Saturday, March 14, when they host Sesi. Sada Cruzeiro, with 53 points (18 wins, three losses), are the only team challenging their position.
More volleyball from Brazil:
Alan helps Sesi stun Superliga leaders Sada Cruzeiro
Carol's block party keeps Praia Clube on a roll in Brazil
Sheilla nearing top form as Tokyo 2020 approaches
Thaisa leads Itambé Minas to South American three-peat
Quick links:FIVB Volleyball Nations LeagueFacebookTwitterInstagramYoutube
{{item.Title}}
See All News
This website uses cookies to ensure you get the best experience on our website. For more information please read our Cookies Policy.
Ok