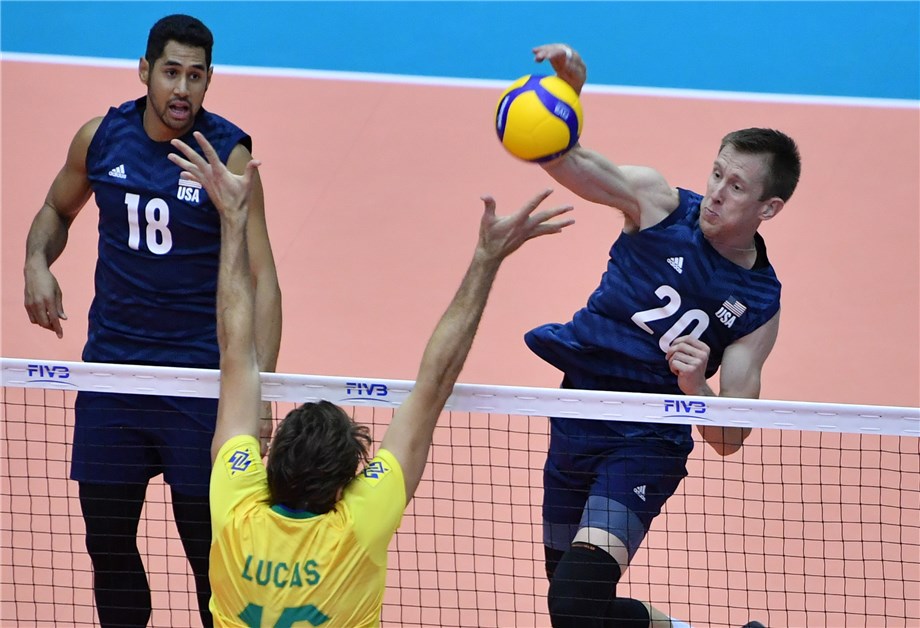 Lausanne, Switzerland, June 9, 2020 – Over the last 11 years, David Smith has grown accustomed to spending his summers practising and playing around the world with the United States men’s national team. This year, due to the coronavirus pandemic, the 35-year-old middle-blocker has had to embrace a completely different scenario and has training at home with no competition in sight for the next few months.
A member of the American team since 2009, Smith admits he’s still adjusting to the reality almost every athlete on the planet is faced with in 2020. But his considerable experience at the international level helps him plan how to take advantage of it.
The veteran, who has played at eight different clubs and in five different leagues since 2008, believes the forced break could be a blessing in disguise for the most experienced players, from a physical standpoint. But he is concerned about what the consequences of not reuniting the country’s national team this summer for the first time in several years could be.
“I think our bodies appreciate the break, but the biggest thing that’s concerning right now is that we can’t be together,” he said during the last edition of The Viral Volley Podcast. “That’s difficult, especially for those of us who have been doing it for a long time. It’s so unusual not to be able to be with each other every single day and that’s an adjustment we all need to make on the mental side of things to make sure we’re somehow actually taking advantage of this situation. But we’ve got a tight group with very experienced guys who have been around each other for years, so I don’t think the team dynamic and chemistry will be completely lost, but we’ll have to put some effort on rebuilding it. I’m confident we'll be in a really good position for the Olympics in 2021.”
The American team has indeed enjoyed a fair amount of time together over the last two Olympic cycles. From the 12 players who took bronze at the Rio 2016 Olympics, only three are no longer available for selection to head coach John Speraw. They are outside hitter Reid Priddy and middle blocker David Lee, who are now beach volleyball players, and opposite Murphy Troy, who retired in 2017.
The current roster, which also includes talented younger players like opposite Ben Patch, outside hitter Thomas Jaeschke and middle blocker Jeff Jendryk, has achieved some important results in the years leading to Tokyo, including bronze medals at the 2018 FIVB Volleyball Men's World Championship and the 2019 FIVB Volleyball World Cup, and podium appearances at the 2018 and 2019 editions of the FIVB Volleyball Nations League, which raises Smith’s hopes about what they can accomplish in the Japanese capital next year.
“We have a very good team,” he reflected. “I think we’ve been on a huge learning curve since the experience we had in Rio. We have tons of experience now and guys who are playing at a really high level in the best leagues in the world. The rest of the world has certainly grown with us, so it’s going to be a really difficult tournament and I’m really looking forward to it, it’s going to be a lot of fun.”
As the oldest player in the American roster and one of just two to have appeared at the London 2012 Olympics – Matt Anderson is the other – Smith already has a plan laid out to keep playing at a high level until the time his third Olympic appearance comes.
And it includes playing for reigning Poland champions ZAKSA Kedzierzyn-Kozle for a second-straight season.
“I think I’m playing at a really high level still and I can bring some of the experience the younger guys might not have,” the 2.02m-tall veteran added. “My biggest goal for the next year is to maintain that same level. Luckily I’ve re-signed with Zaksa, so I’m going back to the same team I played with last season and it’s going to be the best situation in preparing me for 2021. Hopefully we can do some good things next year.”
More volleyball from the United States:
Live with Lauren Carlini: watch all five sessions
Watch: Facebook live with Kelsey Robinson
Patch using break to pursue passion for pottery
Anderson rules out beach switch
Plummer dreams of emulating Kiraly
Player of the Week: Annie Drews
Quick links:
FIVB Volleyball Nations League
Olympic Games Tokyo 2020FacebookTwitterInstagramYoutube
{{item.Title}}
See All News
This website uses cookies to ensure you get the best experience on our website. For more information please read our Cookies Policy.
Ok