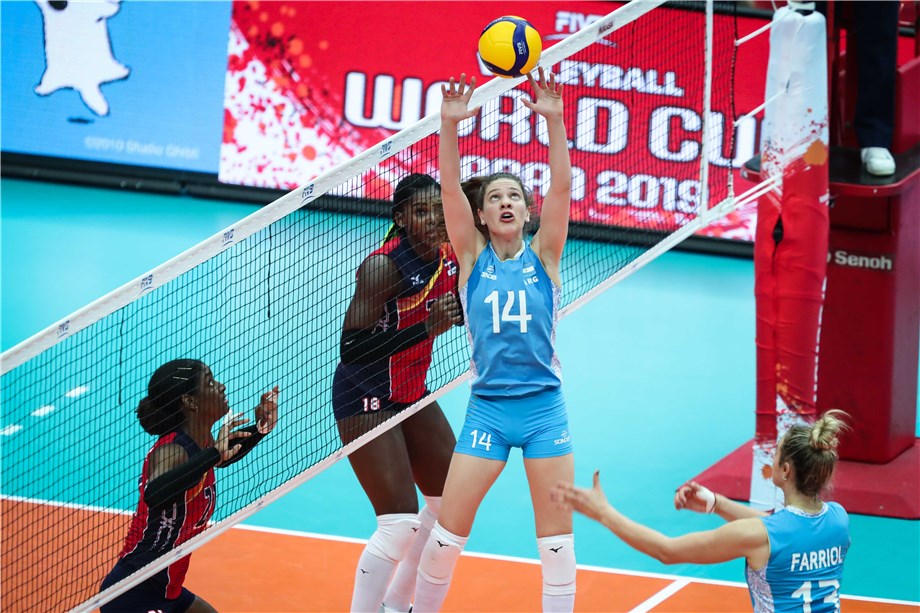 Lausanne, Switzerland, June 30, 2020 – Anyone watching Argentina’s women’s national team during the 2019 international season probably imagined setter Victoria ‘Vicky’ Mayer had been with the South Americans for a while despite her obvious young age.
That was, however, just her first season with Las Panteras (The Panthers, in Spanish), and the setter, at the age of 18, certainly lived up to the expectations of head coach Hernan Ferraro. He called her up after promising performances with the country’s youth teams, which helped them win a silver medal at the U-20 South American Championship in 2018. And he was not disappointed by what he saw from her over the year.
Ferraro’s confidence in Mayer’s game was so high that the coach, also in his first season with the team, gave the young setter a starting spot in her first tournament, nothing less than an Olympic Qualifier in Shreveport, the United States, where the Argentineans faced the hosts, Bulgaria and Kazakhstan for a berth at the Tokyo Games.
“I certainly didn’t expect to start in my very first tournament,” she acknowledged. “But during our training camp Ferraro said he was preparing me to play. I trusted him and our veterans were amazing as they supported me on every step of the way, because I was obviously very nervous. That gave me a lot of confidence and to have their experience to rely on was super encouraging.”
From that tournament, the Argentineans went straight to their next challenge, the Pan-American Games, in Lima, Peru. Mayer retained her starting role and was even voted the best setter of the tournament, helping her team win its first-ever medal in the event, after beating South American rivals Brazil for bronze.
“It was an amazing experience,” Mayer added. “It’s like mini Olympic Games. We were in touch with athletes from multiple sports in the village and it was like a dream to be there. We always shoot for gold, but that bronze medal was really important and it gave us more confidence that we can accomplish even more if we keep working hard.”
What she didn’t know at the time was that the most important moment of her young career with the Argentinean national team was yet to come. A few months later, at the beginning of January, the Argentineans went to Bogota, Colombia, for their final attempt at qualifying for the Tokyo Olympics.
After defeating Peru and Venezuela in straight sets in their first two matches, Mayer and her teammates went on to face the hosts in the match that would decide their fate in regards to Olympic qualification. With another solid performance, the setter guided the Argentineans to a 3-1 victory that secured their second-straight Olympic appearance.
“Those were very nervous days,” Mayer, who’s now 19, reflected. “We knew it was our last chance to qualify and we prepared really well for the tournament. Colombia was playing great volleyball, they were at home and they were super motivated to qualify for their first Olympics. The stadium was packed and we could barely communicate, but our veterans did a great job in reminding us how hard we had prepared for that moment, so we knew we’d give everything we had and would fight until the end no matter what.”
Next year in Tokyo Mayer will be 20 and will likely have the responsibility of leading an ambitious Argentinean team, which will be looking for more than the ninth-place finish it achieved at the Rio 2016 Games.
Despite her relative lack of experience, it seems Mayer has already won the confidence of Ferraro, who is a former setter and Olympian himself. The setter already excels in her distribution and is also a great server, but there’s still a lot of potential to be untapped in her game.
“He’s very demanding, but he’s also very clear and consistent about his concepts and that makes things easier,” she analysed. “One thing I like is that he always takes time to explain why we’re doing things instead of just telling us to do them, which is important for young players as it gives us a purpose. I always like to play fast and a setter that I really look up to is Joanna Wolosz, of Conegliano. Last year I played in Brazil and got to watch a lot of Macris Carneiro too.”
Next season Mayer will have more opportunities to watch the Polish star as she will also play in the Italian League after signing with Reale Mutua Fenera Chieri. That, she expects, will be another massive step in her development.
“Playing in Italy has always been a dream,” the setter remarked. “I want to make the most of this opportunity and to enjoy all of it. I want to play as much as I can, to learn and grow both as a player and as a person.”
More volleyball from Argentina:
Cubans dominate Argentinean League individual awards
Captain Lazcano says Argentina will be stronger in Tokyo
Agustin Loser continues moving fast on and off the court
Nizetich pleased to be back
French league set for Argentinean influx
Argentina coach Ferraro aiming for top 8
De Cecco set to join Lube Civitanova
Former Argentinean captain Sosa eyeing comeback
Quick links:
Olympic Games Tokyo 2020FacebookTwitterInstagramYoutube
{{item.Title}}
See All News
This website uses cookies to ensure you get the best experience on our website. For more information please read our Cookies Policy.
Ok